Last Juneteenth, SLS hosted a webinar intended to provide historical background on the meaning and significance of Juneteenth, as well as an overview of how Juneteenth is (or isn’t) recognized by individual states.(You can find the webinar recording, the slide show, and a reflection including student voices here.) In the year since, the politics of race and remembrance have continued to shift and change at the national level; Congress’s passage of a bill to establish Juneteenth as a federal holiday is perhaps the most significant- but certainly not the only- indicator of those transformations.  Below you’ll find a brief primer on Juneteenth followed by four reflections from my friends and associates across states and institutions – each offering their perspective on the personal and political resonances of Juneteenth. Throughout the post, you’ll also find the images that contributors chose to visually represent Juneteenth, beginning with the Juneteenth flag; you can read about the significance of each element of the flag here.

Serve-Learn-Sustain wishes you and yours a powerful Juneteenth – shared with the people and communities dear to you. 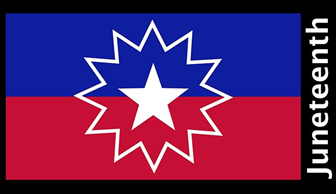 Juneteenth is formed from the words "June" and "19th," because June 19, 1865, is what we recognized as the true date that slaves were freed. The Emancipation Proclamation by President Abraham Lincoln, which became official on Jan. 1, 1863, was supposed to free the slaves. Freedom was finally granted during the end of the Civil War, and Juneteenth marks the day when General Gordon Granger and the Union soldiers occupied Galveston, Texas, and announced that slaves were now free. There were a variety of emotions from shock, fear, and jubilation to the idea that they had choices in their lives that they never had before. Some chose to stay and work for their former "masters" and some chose to flee with nowhere to go. 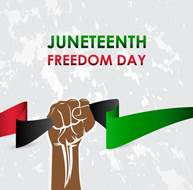 Juneteenth is a day to reflect on the history of ending slavery and to celebrate black lives.  It's a day to acknowledge and take actions consistently towards racial justice.  This is a day to remember how far we have come and yet recognize how far we still have to go. I am very hopeful with all of these terrible events of racial injustice that we will soon begin to see some change.

Juneteenth is the day slaves were declared free!  So even though we celebrate the 4th of July as a country, June 19th is the day African-Americans were finally given independence.  My family and I celebrate and honor those who lost their lives in pursuit of equality and racial injustice.

Juneteenth (also known as Freedom Day and Jubilee Day) is celebrated annually on the 19th of June which is when federal orders were read in Galveston, Texas by Union Major General Gordon Granger that slaves in Texas were free. This is a day that historically and in present day, has been described as having particular significance to African Americans in Texas and all over the United States.  This day should be a national holiday and should be observed just like the 4th of July since this was an Independence Day for African Americans. For me, Juneteenth is a day to reflect on our nation's history, a day to celebrate Black lives, a day to acknowledge, remember, learn, and take action—not just this day but every day. 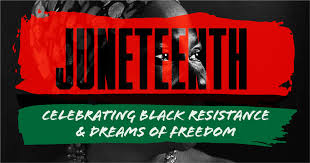 I am an African American man born in the 1940’s.  Juneteenth for many years was not celebrated and was barely mentioned in the state of Louisiana.   I remember a small group of us fighting an “all-white” board of education to get the history of Juneteenth and its importance added to the curriculum.   We wanted to teach African American children about their history and what their ancestors went through for so many years to be “free.”   Today, there are organizations in a number of countries that use this day to recognize the end of slavery and to celebrate the culture and achievements of African Americans.