Volunteers Around the World: Alternative Service Break in Guatemala

This winter break, I spent 9 days leading thirteen of my Georgia Tech peers on a medical outreach service trip to San Pedro La Laguna, Guatemala through Georgia Tech’s student organization, Volunteers Around the World (VAW). San Pedro is a beautiful community about four hours west of Guatemala City, situated on Lake Atitlan, in the mountains. The objective of our days was to run pop-up medical clinics in rural nearby villages, taking care of patient needs through four main stations: intake, vitals, consultation, and pharmacy. At night, we stayed with host families, who provided home cooked Guatemalan meals. As my team’s selected Team Lead, I had extra responsibilities such as planning trip logistics, organizing clinic days, regulating flow of patients, solving problems as they arose, and mediating group dynamic.

One of the greatest challenges my team faced was language barriers. Not only did we not have Spanish/English translators, as we had originally planned, but also many older patients only spoke ancient Mayan dialects. Two of our Georgia Tech teammates were fluent Spanish speakers and were a major help in communicating both in the clinics and with our host families. We had a site coordinator who translated one of the Mayan dialects into Spanish. For other dialects, we fortunately had kind people from the community volunteer to translate for the patients. Despite language barriers, I quickly realized how easy it can be to communicate with a smile and positive body language. Patients complimented our team on how friendly and welcoming we were. No one was upset that we couldn’t communicate flawlessly. Clinic also proved to be a great opportunity to pick up some basic Spanish. By the last day of clinic, a site coordinator complimented us on how great our Spanish was and how natural we seemed.

At the first station, intake, we interviewed patients and recorded their personal information and medical histories. It was similar to new patient paperwork that Americans are familiar with filling out at a doctor’s office, but since many patients could not write, we recorded for them. At intake, many patients had little to say. Medical history was sparse, especially for those who had never visited a doctor before. Family histories of diabetes, cancer, and heart problems were unknown. Even birth dates were often unknown. But when we inquired about why they were visiting the clinic, there was much to say. Patients came with all sorts of ailments- from bloody coughs, to bites and rashes, to tumors, and more. Families typically came together, most commonly, mothers with many small children. Males rarely visited clinic, as they tended to be out farming during the day.

At vitals, we took height, weight, waist circumference, temperature, pulse, blood pressure, and blood glucose data. Our site coordinators had informed us that diabetes was a huge problem around Lake Atitlan, and we quickly found this to be true. Initially, we were surprised that nearly every older person had high blood glucose. Normal blood glucose is defined as less than 140 mg/dL. We encountered patients with over 600 mg/dL, or our machine simply read “high”. After a while, we became used to this reality- when poverty is rampant, soda is cheaper than water, and sugary snacks are more accessible than wholesome meals, and diabetes is a fact of life. 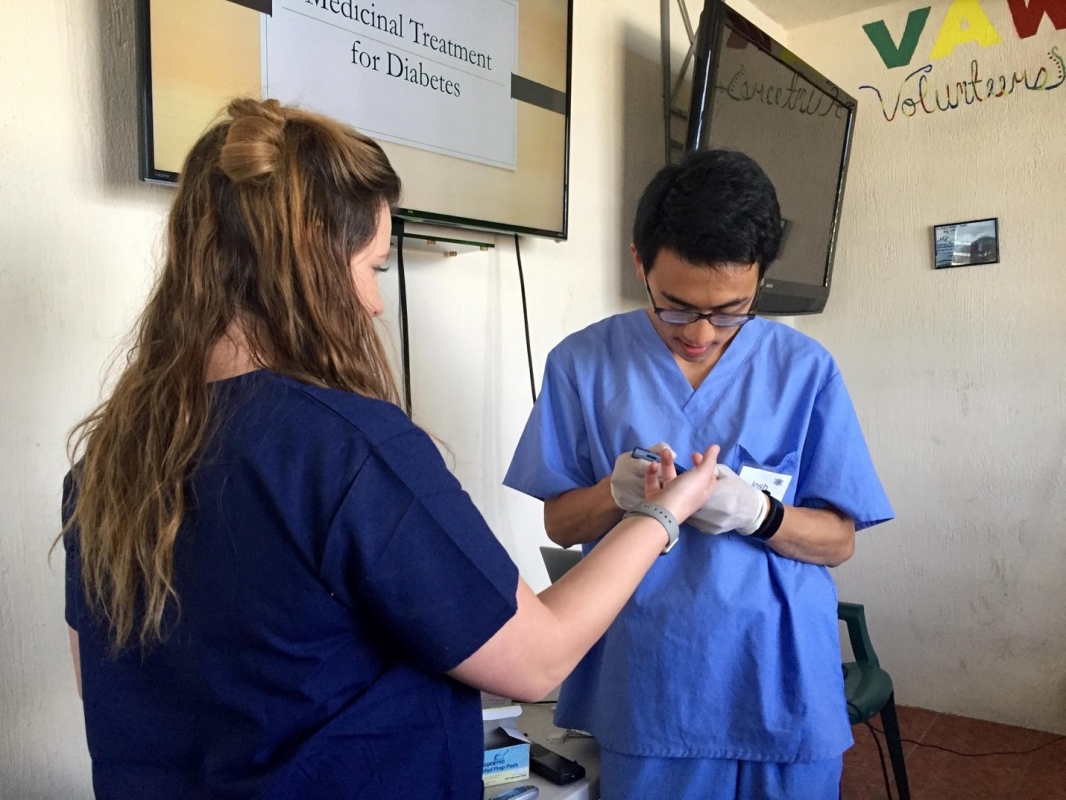 The high rates of diabetes inspired our topic for our Health Education Day. VAW believes that education is the sustainable way to better health outcomes. Therefore, every student group leads a Health Education Day with the local community. Our team gave a class on diabetes education in Spanish to a Guatemalan audience. We discussed everything from types, causes, symptoms, and treatment with and without access to medicine. Our teammate offered to take blood glucose levels both before and after eating to show how levels increase with sugar consumption. Finally, we showed how much sugar was in local dietary favorites, such as tortillas, plantains, and sweet bread, by a visual demonstration of sugar crystals in a clear jar.

At consultation, patients saw one of four native Guatemalan doctors. The doctors were recent medical school graduates. Our teammates had the opportunity to shadow doctors while they met with patients. VAW believes in patients, volunteers, and doctors all learning from clinic, so they choose young doctors who can benefit from the extra practice to work in their clinics. Doctors used Guatemalan medical practices, spoke the language, and could relate to patients culturally. This benefited patients and did not impose Western medical practices on them. In Guatemala, a prescription is required to obtain any sort of drug, including vitamins, painkillers, and other over-the-counter medicines. We traveled with all sorts of drugs packed up in boxes. In clinic, we administered the drugs to patients and explained to them how to take their medicines. We also distributed toothbrushes and toothpaste bottles that were donated from an Atlanta dentist. Clinic visits and medicines were completely free of charge to patients. Volunteers and donations covered all the medical costs.

While in Guatemala, we saw beautiful sites by hiking a mountain at sunrise, kayaking on the lake, cliff jumping into the lake, and taking boat rides to nearby towns. One thing that struck me is how clean the areas we visited were. Our host families separated their trash into organic and nonorganic wastes. Reusing and recycling was extremely prominent. Shops bagged purchases in sacks made from old newspaper. Litter was nearly nonexistent. Lake Atitlan was just about the cleanest body of water I’ve ever seen. Families made and wore homemade textiles and washed clothes by hand. I’ve heard stereotypes of developing countries being polluted and dirty, but I did not find this to be true in the areas around Lake Atitlan. As far as health sustainability, our site coordinators spoke to us about VAW’s efforts in sustainable farming practices and education, which they believe are the keys to long-term positive health outcomes. While the patients we saw were immediately left feeling better upon receiving treatment and medicines, our team wondered how these people would remain healthy once we left. This leads to many questions about the sustainability of healthcare in developing countries, an area where sustainability is often overlooked.

VAW at Georgia Tech offers three international medical service outreach trips each year. For spring break of 2019, a team is serving in Jarabacoa, Dominican Republic. Once the semester ends in May 2019, another team will serve in Siem Reap, Cambodia. I highly recommend interested students from any major or background to apply for future trips. You can find out more about VAW HERE. 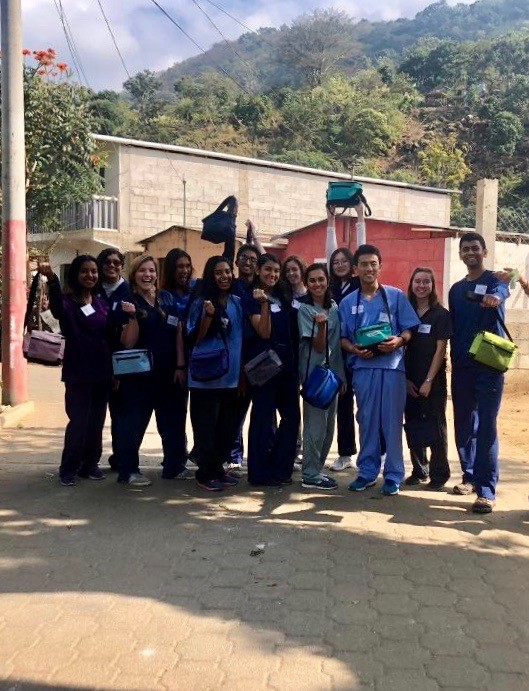