I spent the morning collecting water samples as part of the Second Annual River Rendezvous, sponsored by the West Atlanta Watershed Alliance (WAWA) and Chattahoochee Riverkeeper. I don’t find many chances to spend time in the West End (usually just for Serve Learn Sustain courses and to go with my friend to buy hair), but am always thankful to get to see and support the community. Citizen scientists today ranged from people from around the Bankhead area, frequent water quality volunteers, and a large handful of people from Georgia Tech. I am always amazed by the local volunteers and the robust community backing West Atlanta initiatives (whether it be runoff pollution or incoming gentrification, both issues for someone much smarter than myself to sort out), which is a kindness lacking in most of Atlanta and something I haven’t seen much of since leaving Louisville, Kentucky. My partner (a geochemist at UGA that got dragged along) and I were assigned two sites across West Atlanta, both bridge sites that were better for us to teeter over than some of the younger citizen scientists. 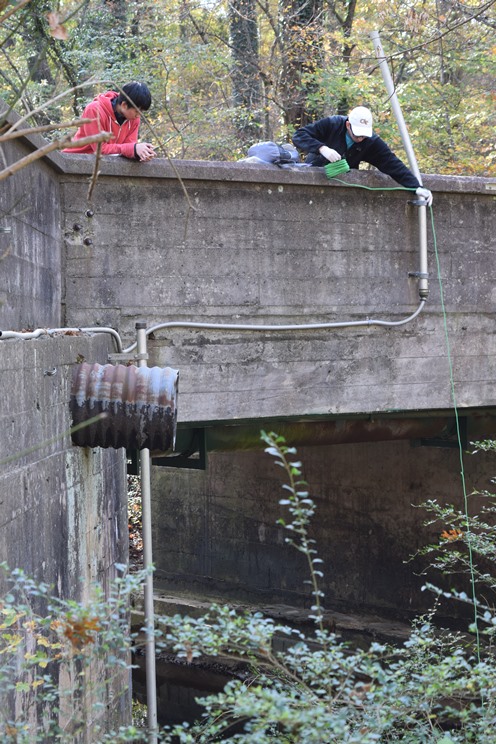 After retying some loose knots in the device used to lower whirl packs from the bridges into the creeks, we collected water from our assigned locations (2 sets of 2 replicates). While the first location had many rude dads in minivans that honked at us angrily as they drove by and whose water smelled strongly of old eggs (sewage), the second location by the KFC on Cascade Road was bright and sunny and had a sidewalk instead of an unsteady road full of cars to sample from. We were stopped frequently by locals interested in what we were testing for in the creek and were stopped by a group of local volunteers cleaning up trash (picture high visibility vests) that were interested in the project and wanted to know how to get involved. I was happy to give them my pen which had all the WAWA information. Getting to chat while out at our brief sampling outing was an unexpected and refreshing break from Midtown’s usual apathy.

I was also lucky to get to learn about the Chattahoochee Watershed in a broader context than I’ve learned through other volunteer efforts and SLS programs I’ve done in the area (largely in the nearby but much smaller Lindsey Street Park). Something I hadn’t considered before was the bifurcation of water runoff between East Atlanta (which eventually runs into the Atlantic Ocean) and West Atlanta (which eventually runs into the Gulf of Mexico). Our samples (taken from many sites all across West Atlanta) will be tested for Escherichia coli, and a subset of sites were probed from conductivity, temperature, and depth (CTD). I suspect the work and findings of WAWA and the Chattahoochee Riverkeepers will be especially interesting in this second year, namely as the city is now trying to purchase the large parcel of land North of Grove Park (Westside Reservoir Park, home of the Bellwood Quarry and currently owned by Vulcan Materials Company). I find it essential that any moves the City intends to make be in consideration of the work of WAWA and the local community of West Atlanta.

In summary, I’m incredibly thankful to WAWA and hope to volunteer again in the future. The people I most interacted with were the main coordinators (Na’Taki and Mike), but we didn’t stick around too long after turning in our samples (just long enough for pizza).