In June 2017, The Center for Serve-Learn-Sustain partnered with IPaT and Civic Data Science to host a satellite conference as part of the Integrated Network for Social Sustainability (INSS).  The multi-site conference with the theme of "Smart, Connected Communities," focused on smart cities and data for sustainable communities.  Carl DiSalvo, SCCC Fellows Program Faculty Co-Director, presented a Smart Cities panel discussion, which built on the work of the Smart Cities, Connected Communities Fellows program.  For additional INSS resources, please see our resources page.

This Spring I had the privilege of co-organizing the SLS Smart Cities, Connected Communities Fellows Program. When I was first approached, I agreed because I wanted to push myself. I like to think that I have a pretty diverse portfolio of interests, but this was an opportunity to reach out and learn new things, not just academic, but also about the city I live in. I’d also decided that I wanted to broaden my networks of colleagues on campus, and this was a great opportunity to interact with colleagues from many of the different colleges and units that make up Georgia Tech. All my reasons for participation then were based on the potential for future opportunities. 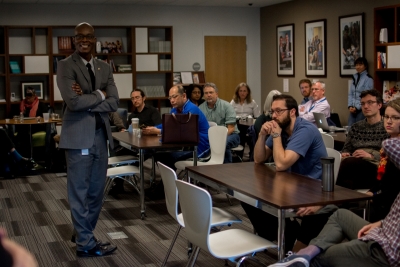 A funny thing happened along the way, I ended up getting involved in an entirely different Smart Cities and Connected Communities project, with an emphasis on those who are not in urban centers but geographically dispersed in America’s vast rural spaces. Rural communities need connectivity too, but suffer from unique challenges that cities don’t face. With density the potential for connectivity seems higher, even if the reality is far more complex. In a way, the time I spent in SLS SCCC became a dialog with the focus I was developing on rural infrastructure. The SCCC Fellows conversations, and the invited guests, helped me realize that the very idea of “smart city, connected community” is very fluid, as the blog posts from the fellows reflect in their discussions about what “smart” means, who is connected in the city, and who are often left out of those visions (e.g., the big belly bins and their implications for those who forage from bins). This prompted my own reflection, particularly on how the city itself as a construct might shape who was left out of a broader national agenda on intelligent infrastructure, specifically rural communities. For example, as we learnt about the City of Atlanta and Georgia Tech’s partnership, so I wondered what entities could come together in the rural context.

As I reflect on the times we came together, it was the sharing and collective wisdom of the Fellows that ultimately helped me to form ideas that would end up being part of a case made to ensure that rural communities receive attention as we push a Smart and Connected agenda. After all, you don’t just have to live in the City of Atlanta to want to be more connected. But, for those of us who do, and work at Georgia Tech we have a really unique opportunity to continue to think about what sort of smart city future we want, while hopefully be an advocate for everyone to receive the benefits.

Smart Cities – Moving beyond the “Smart”

After co-directing a fellows program on smart cities for a semester, I still don’t have working definition of what a smart city is, but I do have a better appreciation of what all it might be, and just as important, what the pressing issues are that need to be addressed, and what we might do about those issues here at Georgia Tech. Recently, a colleague of mine pointed out that when we talk about smart cities, and for that matter when we research smart cities, we mostly focus on the “smart.” And I think that’s mostly true. Or at least we mostly focus on the “smart” as an issue of technology in a very traditional sense: computation and engineering, algorithms and sensors.  But whatever the smart city is, or will be, it’s going to be more than that, it has to be if we want to be equitable and just, if we want it to foster sustainable communities. 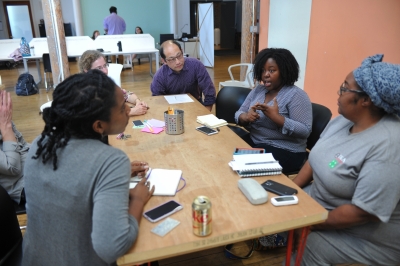 These are questions that we do not have answers to. And that’s a problem. It’s a problem because these technologies and the products and services they will enable are largely civic—they figure into and shape how we live together. One of the things we are talking about when we talk about smart cities (or research, engineer, or design the technologies that comprise smart cities) is new ways of structuring and ordering our shared lives. In some cases this involves government entities, in other cases not. In all cases, the decisions that are made, or not made, could have lasting effect on how we experience and participate in 21st century civics.

The good news is that it seems we know that we don’t know the answers to these questions, and we realize that addressing them is important. Time and again this came up among the participants in the Smart Cities Fellows program. This is encouraging. Perhaps it portends an even more significant change: perhaps in the next decade we—Georgia Tech—will go from being known as renowned for our expertise in technology to renowned for our expertise in the socio-technical. If there is one lesson I have learned from my work with Serve-Learn-Sustain, it is that many of our faculty, staff, and students are committed to a public good beyond research, beyond innovation. The Smart Cities Fellows program brought many of those people together, and I look forward to seeing how those collaborations that were started in the Fellows program develop, and in the process, work to bring about a notion of the smart city that is more than just technology.