Alternative Service Break with the Office of International Education
May 29, 2017
Michael Bryan II

Over spring break, I took the opportunity to try something different—I decided to spend my break volunteering. Like many Tech students do, I participated in an “Alternative Service Break” project with the Office of International Education (co-sponsored by Serve-Learn-Sustain); our destination was a small city in Florida called DeFuniak Springs, where we would take up residence for several days. Disembarking from the school on Sunday, March 19, our trip began like any other—no one really spoke to each other, or in certain cases came already with a friend. Everyone mostly kept to themselves, until our second stop on the way down. Stopping at a state park, our group was allowed some time to walk around and explore before having a group activity. As an “intellectual” warm-up, the group discussed our ideas on this project: how it might affect the environment, whether we have done service trips before, etc. There was still nervousness throughout the group, but it became clear that everyone was starting to become more comfortable with each other. Dinner afterwards was even better as several groups of people had to sit together, forcing some interaction.

The next day—our first work day—started with 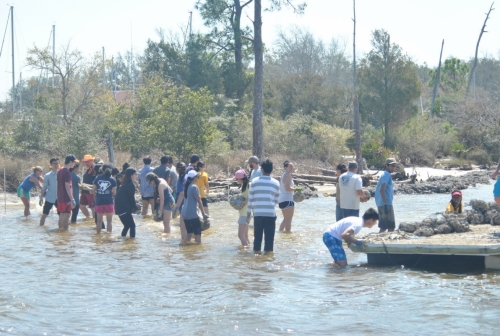 an early morning. Gathering in the common area of our camp, everyone prepared breakfast and lunch as our project for the week was explained in more detail. The Living Shoreline—a project with which I had prior experience with—is a conservation project that is used in coastal regions to help promote the growth of microecosystems, and reduce erosion. It involves the bagging of fossilized oysters, which are strategically placed along beaches to help build-ups of sand pockets, slowing the effects of erosion. Young oysters as well can collect on these fossilized reefs, growing and providing a food source for ocean life. Going out to a dock located in Niceville, Florida, we spent the first day bagging the oysters before ferrying them out to the build site—where the second day would begin. After a long day of working and getting wet, we returned to camp; volunteers were chosen to make dinner, while everyone else went about their day. Being invited to play soccer, I took the opportunity to get to further know some of my fellow volunteers. 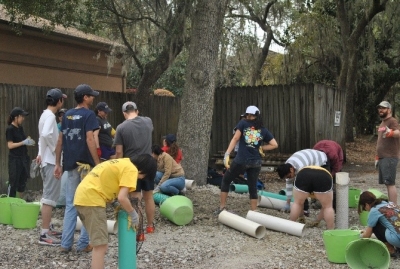 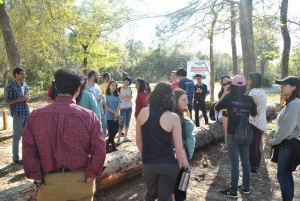 On our last work day, we went out and set up the oysters. Not only did we work swiftly, but we finished three times as many reefs as our host organization because we had so many volunteers. Along with that good news, we also learned that we were being treated to dinner by a former Tech Alumni, who happened to be the president of the Florida chapter. That night, not only could it be seen that our group bonded wonderfully, but we even took the time to get to know each other on a cultural level. My favorite memory from this trip: on the bus ride from dinner, every person on the bus representing a cultural region performed a song in their language—performances from Russia, Spain, China, Singapore, India, America, the list goes on. At no other point on the trip did I feel more connected with the group, and I am truly glad for this experience. Georgia Tech truly is a diverse school, and this trip only reminded me of just how important diversity is in the world.

Michael Bryan II is an undergraduate Environmental Engineering major, and works as a student assistant in the Office of Campus Sustainability.