We are pleased to provide you with the fourth in a series of blog posts from our 2017 Global Student Ambassadors.  This week, we highlight the Language for Business and Technology: France program which provides students with the opportunity to spend seven weeks in Paris, studying French culture, architecture, and art.  Our Global Student Ambassador in this program, Connor McMahon, writes about her experiences with transportation, recycling and reuse, and organic farming in France.

The Paris Metro waits for no one. It operates at an exact efficiency, sometimes at the passengers’ cost. This was a lesson I learned during one of my first days in the city. While rounding the corner in the metro I heard the woosh of the train coming, and I hurriedly made my way down the stairs, only to be greeted by a huge crowd of people attempting to mount the same train. The doors opened and the crowd in front of me fought their way through the exiting riders. As the seconds ticked by, I grew more anxious that I would be caught in between the doors when it was time for them to shut. The moment I stepped onto the train, the closing signal sounded, and I turned around to find a woman’s arm caught in the door. Thankfully, the other passengers pried the doors open to save her, and she made it on the train. The Paris Metro is unfortunately notorious for events like this due to its need to be as efficient as possible. Don’t be scared off by this fact; if you follow the rules, this will not happen to you. The metro’s tight time tables make it one of the reliable modes of transportation in the city. Other popular ways of getting around include biking, walking and using the bus.

While the metro network in Paris can be intimidating at times, it is phenomenal; it is extensive, efficient, and well-kept. One metro ride can get you within walking distance of anywhere you could dream of going in the city. It is not hard to navigate through the Paris metro system as they have made the train routes and maps easy to follow, even for tourists. The Paris metro is also the most reliable system of public transportation I have taken in Europe. Trains come every two to ten minutes depending on where you are and what time of day it is, so you know that you can always count on the metro to get you to your destination in a timely fashion. For these reasons, it is not uncommon to look up and find Parisians dressed in business attire on their way to work or a group of children heading off to school. Paris also has extensive bus routes that cover the paths traversed by the metro as well as those in between. There are designated lanes for buses on the main streets of Paris, so the busy streets of the city never slow them down. This helps to keep the buses just as efficient as the metro.

Not only is Paris’ infrastructure great for getting around by bus or by metro, it is also pedestrian and bicycle friendly. There are lanes designated for bicyclists throughout the main streets in Paris as well as signs and markings on the ground telling drivers to share the road with bicyclists. Paris also has numerous places where you can rent bikes for the day. Many locals use them to get around the city as it is not expensive to purchase a yearly subscription, and it is much easier than storing their own bike. As for using sidewalks, the major the streets of Paris are wide enough to fit large amounts of people which speeds up the flow of pedestrian traffic and makes walking a practical way to travel around the city. The efficiency and practicality of Paris has only been enhanced by the creation of biking and walking communities.

The infrastructure in Paris serves as a great example for other cities to follow. It is easy to comprehend, affordable, and can get you just about anywhere you wish to go in the city. The many options the city offers range from the metro to busses to biking and walking. Paris’ public transportation and pedestrian friendly streets keep the city running efficiently as the city builds its sustainable community.

On an average day in Paris, you never know what you will discover while walking through the streets. I have stumbled across mini carnivals in parks, street performers playing with fire, and free salsa lessons right next to the Seine River. An event that I came across while wondering through the city one day gave me a great insight into how Parisians work to reduce waste in landfills. The event was called “Fête de la Récup” meaning “Salvage Party” and it centered around teaching people how to fix broken appliances that could be repaired and used again. 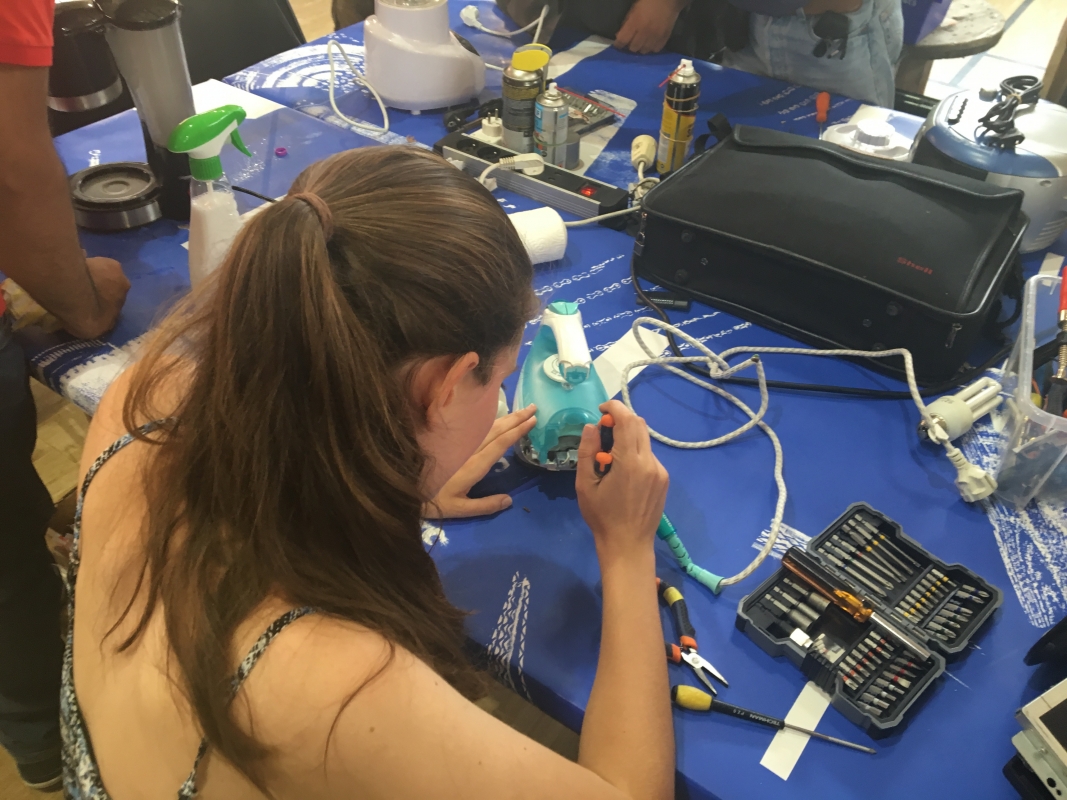 When we entered the building, a volunteer greeted us and explained how we could participate. She told us that the purpose of the event was to exhibit what transpires in appliance recycling centers in Paris. The four main objectives at these recycling centers are to collect appliances without being selective, revalue these objects, redistribute these objects at lower prices, and raise awareness to the public of this practice.

We were then directed to the area where the broken appliances were located. She told us that if we could repair the items, we could take them home. The appliances there had been donated by locals who would have otherwise thrown them out. In the bins, there were hairdryers, irons, toasters, blenders, and more. We selected an iron and headed over to the repair tables. When we arrived, we found engineers, electricians, and mechanics all eager to help. We took apart the iron and discovered that the problem resulted from a wire breaking. After the electrician inspected it and deemed that it was safe to fix, we soldered the wire back together and reassembled the remainder of the iron. We plugged it into the wall and a few seconds after flipping the switch, the iron began heating up. We did it! We saved an iron from going to the dump! 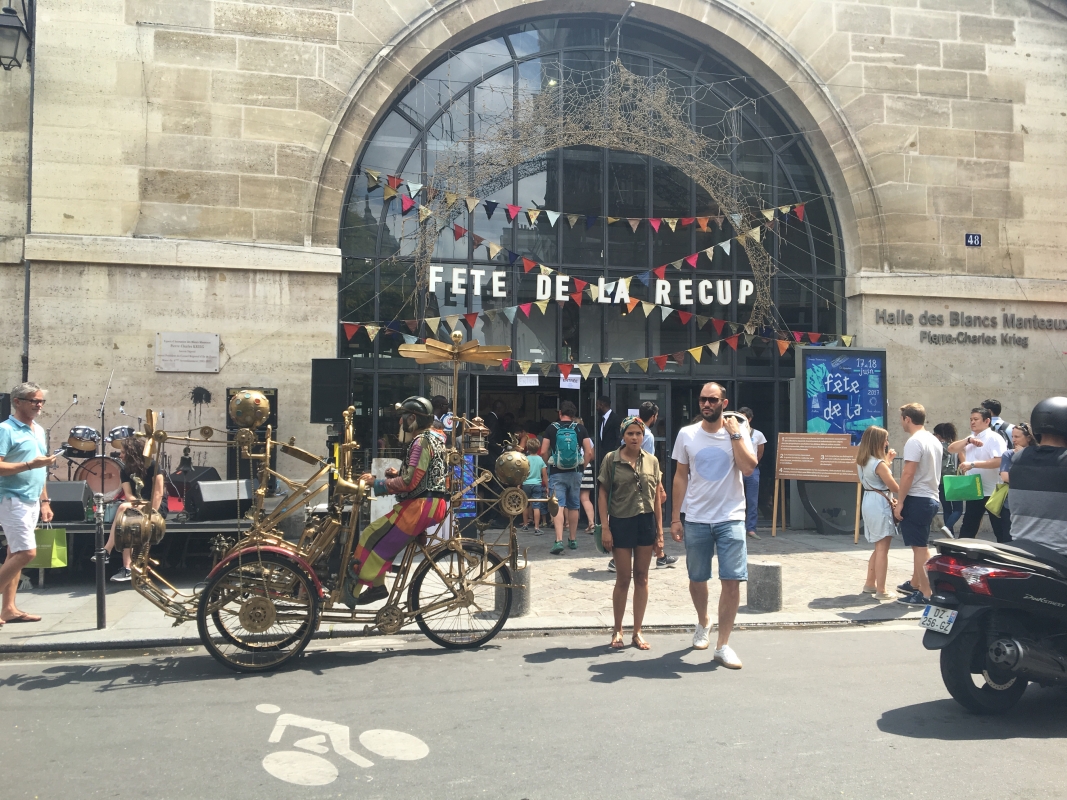 We thanked the electrician who had helped us and went outside to check out the other parts of the event. There were about 50 vendors selling everything ranging from old nail polish to bracelets made from recycled tires. My favorite stand was run by a woman whose goal was to minimize the waste produced from old sports equipment. Her main products were wallets and purses that she made from old rugby balls and basketballs. They looked just like any other wallet or purse that you could find in the mall, and they were much more affordable. She also made mini sculptures of the Eiffel Tower and other monuments in Paris with old bicycle parts. Her husband, who was helping people fix their broken bikes, told us that he and his wife had been doing this for fifteen years and that they plan on continuing for as long as they can.

This experience showed me that we can salvage appliances that were once believed irreparable and delay their arrival at landfills. Events like this one help spread awareness and encourage the public to adopt this practice at home. Perhaps one day it will be routine to take our old, broken appliances to the repair shop instead of disposing of them as soon as they stop functioning.

The organic food industry in Europe is taking off as more and more European consumers begin to pay attention to the origins of their food and how it is processed. Europeans who choose to purchase organic products do it not only for their own health but also for the health of the environment. Along with growing foods without the use of harmful pesticides, organic farms in Europe take other extensive measures to reduce their negative impact on the environment. I was able to visit an organic farm for the first time when I took a weekend trip to visit my foreign exchange student from high school. 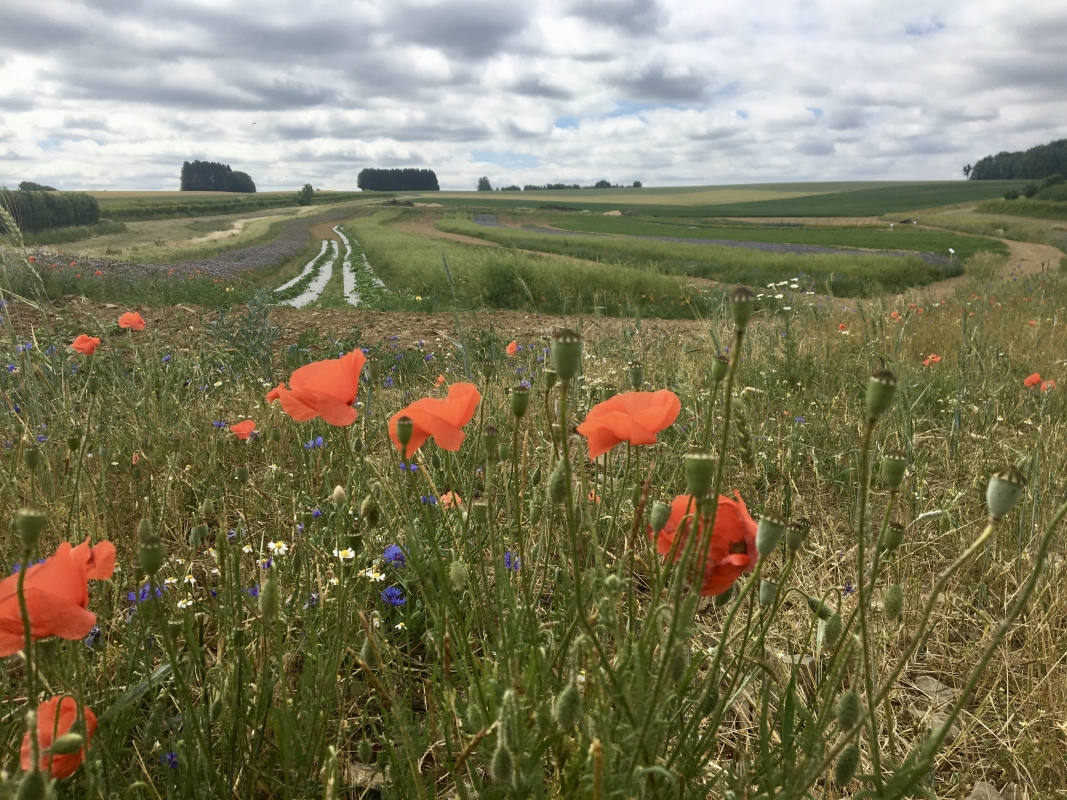 My foreign exchange student, Solène, lives near Metz, France with her parents. Her oldest sister, Melanie, is developing her own bio ferme (organic farm) where she can educate children on the importance of producing and consuming “clean” food. She is currently going through training to accomplish this goal. Melanie spends her weekends visiting organic farms near her home to learn about the techniques employed on these farms. I accompanied Melanie and Solène to an organic farm in Belgium one weekend to discover the differences between organic and nonorganic farms.

When we made it to the organic farm, I was surprised to find about 100 other people who were there for the same reasons as us. Shortly after arriving, we met up with a tour guide who showed us around the farm and explained how it was run. He started off by taking us to the cow pasture. He explained that they use the manure from the cows to produce fertilizer for their crops instead of buying artificial fertilizers. The guide described how organic fertilizers help to improve the health of the soil by increasing the amount of nutrients and water it can hold. We then headed over to the fields where they grow their crops.

The first thing the guide pointed out is that they use drip irrigation to water their crops. This reduces the amount of water needed to maintain the plants and therefore reduces cost and water waste. He then proceeded to explain that they use crop rotation and companion planting, the growing of different crops close to each other, to increase their yields. They rotate the fields every growing season based on the nutrients needed by each crop to prevent depleting the soil of certain nutrients. Companion planting increases crop productivity by maximizing the use of the space and aiding with pollination. After adopting this practice, the farm had a notable increase in their yields. The farm also uses biological pest control to naturally minimize the number of pests on the farm. They breed predators that naturally occur in the area and release them on the farm in the hope that they will reduce pest population. Since putting this into practice, the number of pests affecting their crops has remarkably decreased, and they were able to accomplish this without any negative effects on the surrounding environment.

Organic farmers across Europe are increasing their yields as the demand for organic products begins to rise. The techniques used by these farmers are constantly evolving as new practices are developing that reduce waste and increase efficiency. Eating organic foods grown on farms that utilize environmentally friendly practices, such as the farm that I visited in Belgium, is one simple way that we can make a significant difference in reducing our negative impact on the environment.