It was 4 AM the day after the last day of Spring semester and I was headed to the airport with a group of complete strangers. We were a diverse group of students from all majors and years. After a few sleepy flights and a crowded layover, we had made it to Belize. It was almost the beginning of the rainy season, so the humidity was off the charts and it rained off and on for days. We met our hosts and started on the 4 hour van ride to the EcoLodge, where we were staying. 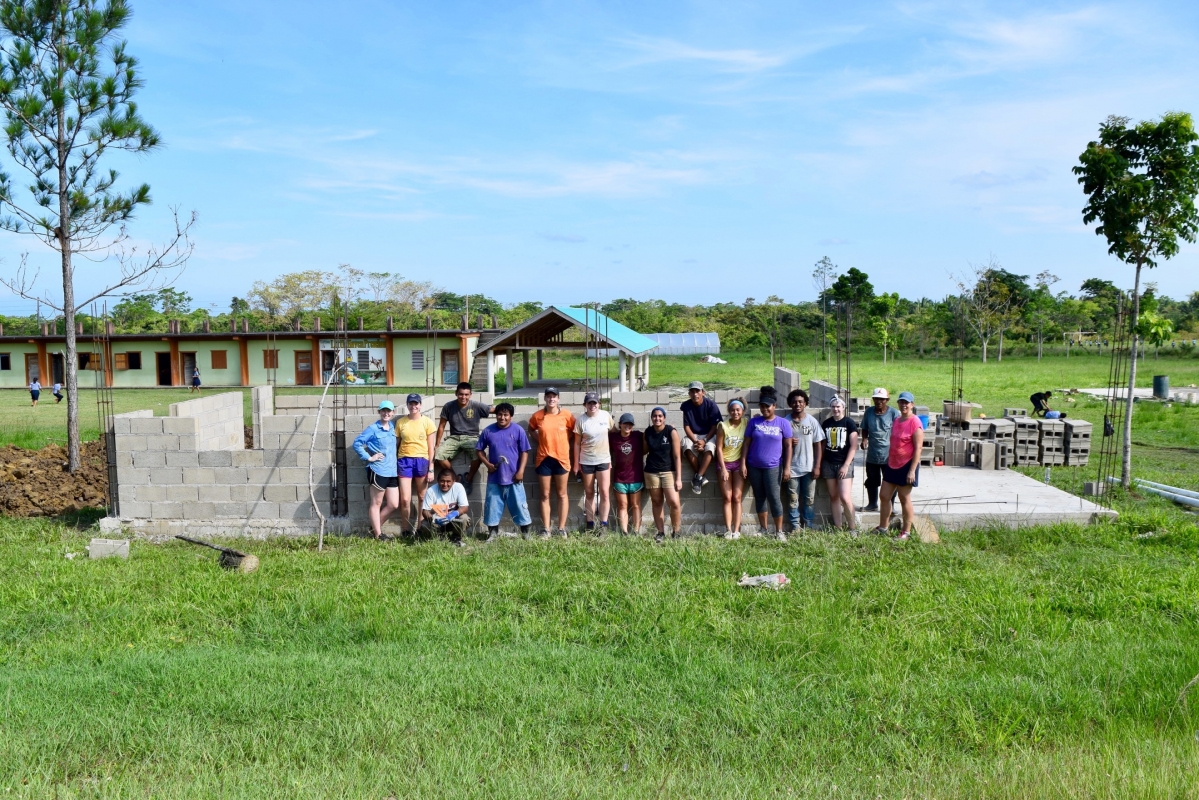 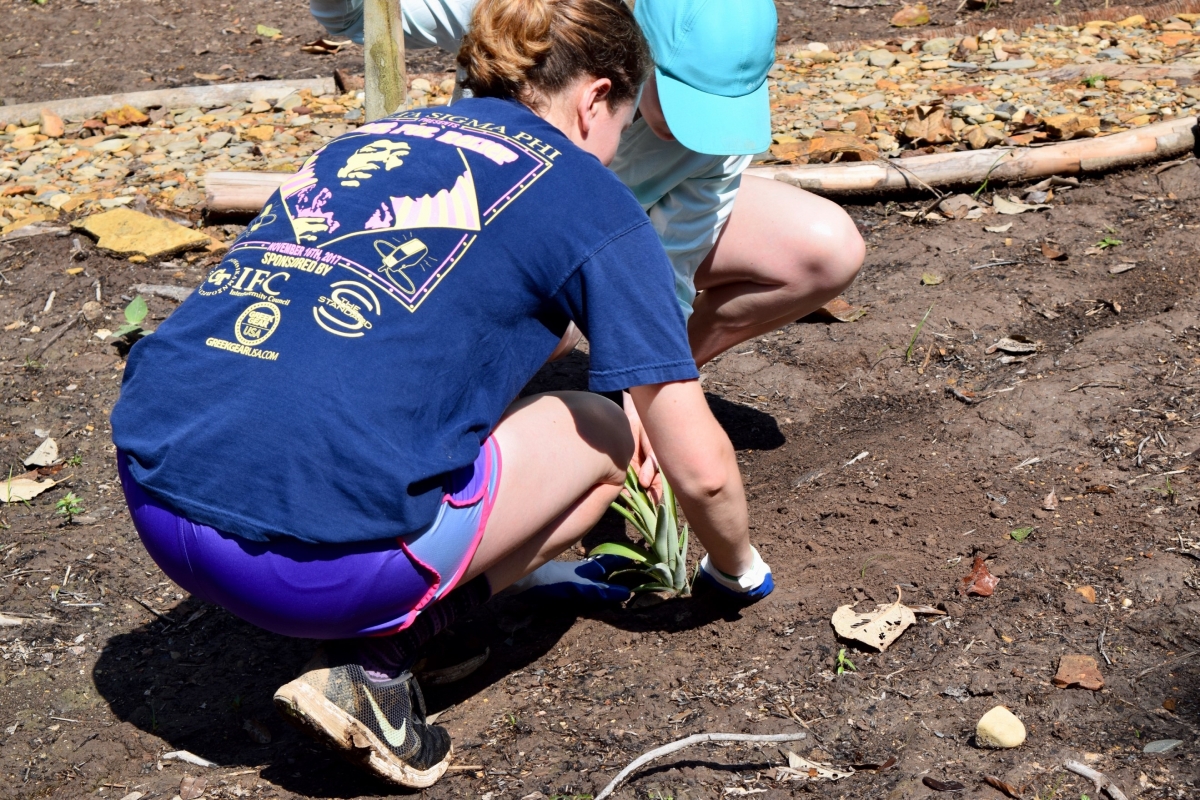 The organization we were working with in country is called 7 Elements, a service learning organization that emphasizes sustainability and education. 7e worked with a family from a nearby Mayan community to build the EcoLodge and have them run it to host students. 7e’s efforts in Belize revolve around educating students to help fund projects that local communities are in need of. The EcoLodge gives a local family the opportunity to educate students on their culture while providing a lodge for travelers to stay. We got ourselves settled into our bunks, played some name games, ate and went to bed. 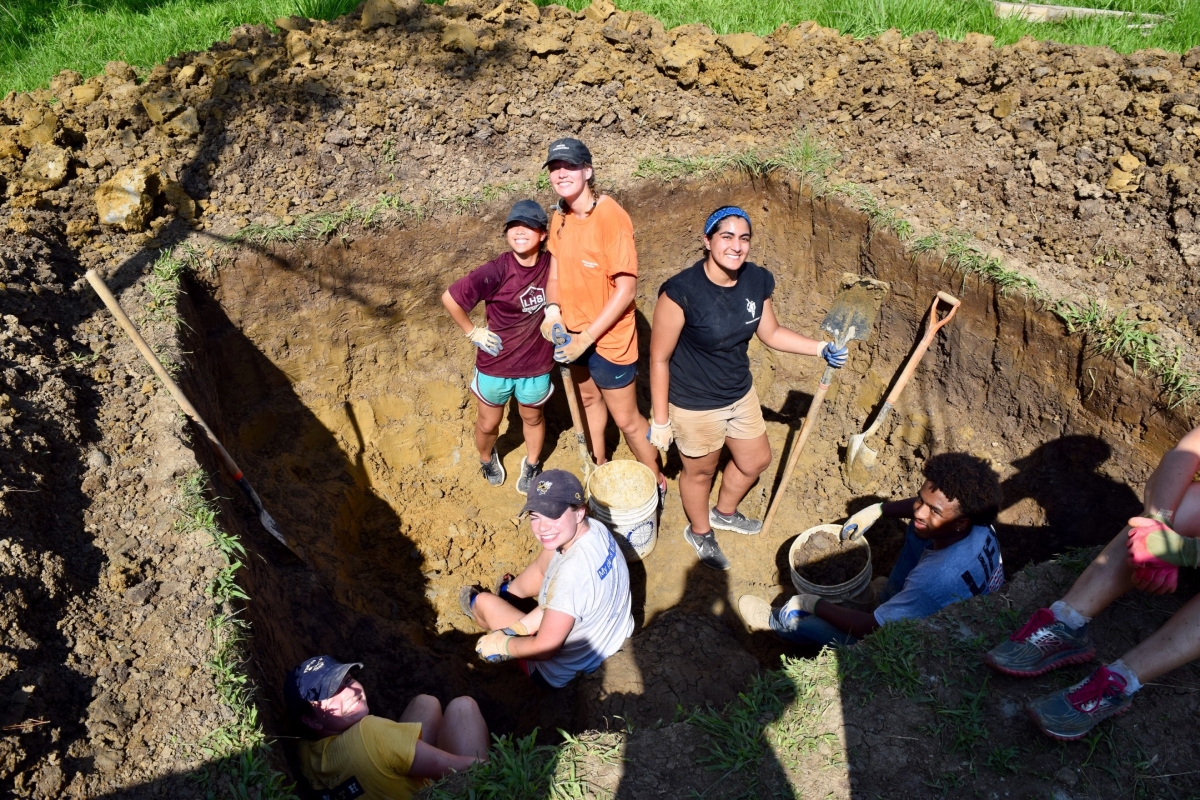 Our project for the week was in a Mayan community called Indian Creek. They lost their health center over 10 years ago to a hurricane and had been unable to rebuild it. They were using the school and community center to administer vaccinations and give basic health care services, and had to travel into neighboring communities for a full clinic. Another student group worked on the health center before us and many more groups will come until its finished, so construction had already begun before we arrived in country. Our biggest task was to dig the hole for the septic. We worked with community members to measure the pit and then we were given shovels and just started digging. I was able to talk with the community chairman quite a bit about Indian Creek and the plan for the health center once it was finished. He is working with a Peace Corps volunteer to bring a doctor once a week and have nurses stationed there more frequently.

Throughout the week we learned more about Mayan culture. We helped plant corn and pineapple around the EcoLodge, learned how to make tortillas and weave baskets using local resources. I loved seeing how ancient farming techniques are still used and how sustainable those techniques are. We learned a number of different ways to treat corn in addition to planting it, and used the dried husks to start a fire that night. The pineapple we planted was just the tops of pineapples that another community was going to throw out. The community showed me a sustainable way to farm and feed a family.

We were unplugged from the rest of our lives this week – school, work, drama - and it made us more connected as a group and able to really devote time to learning about each other and the community, which is a lesson I’ll be taking with me back to school. It’s amazing what you can learn about someone when you are really present in a conversation. This summer break experience was more fun and enriching than I could have ever expected and I want to thank ASB and Serve Learn Sustain for this opportunity. 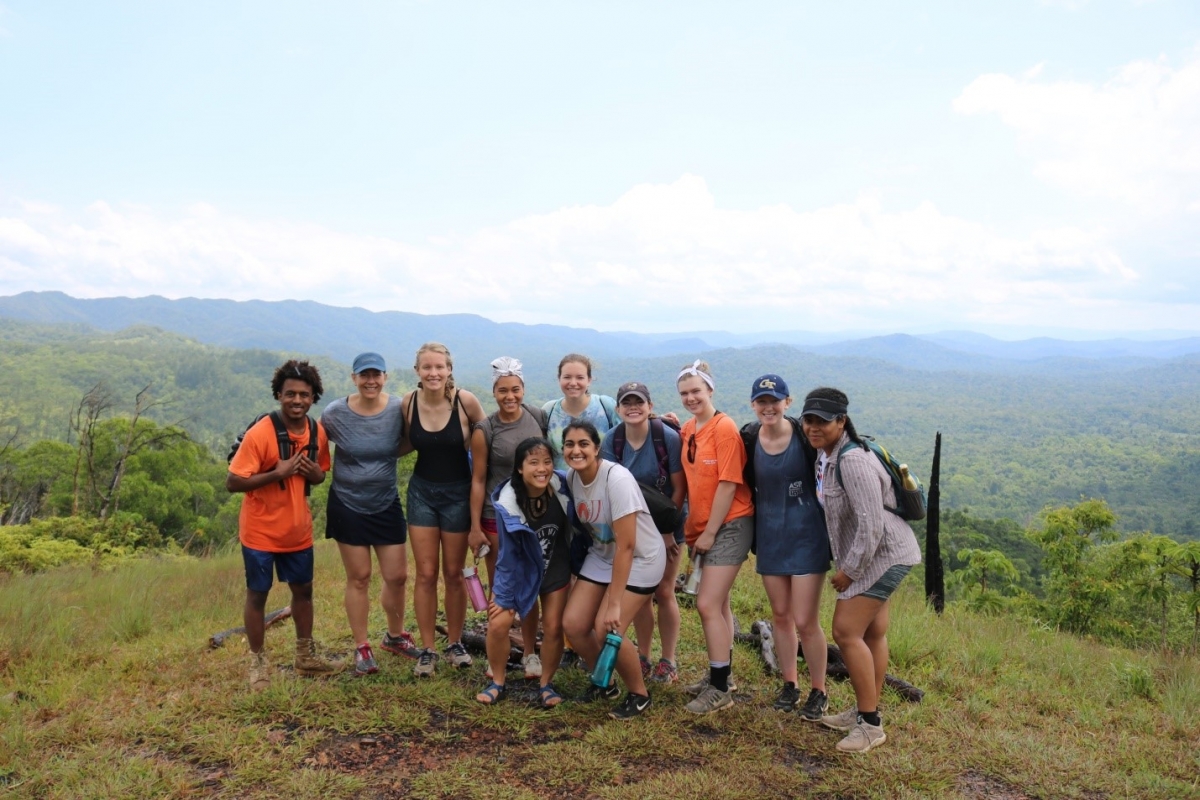 Earlier this summer, I was lucky enough to go on an ASB trip to Belize where we worked with an organization called 7 Elements to build a health center for the Indian Creek community. I had never been on an ASB trip before so I wasn’t sure what to expect – I figured I would be able provide some service to a local community, maybe learn a little about the culture, meet some new people and then head back home. But it was so much more than that. I have heard people say that when you do community service, you end up gaining more out of it than you give. I never truly understood this idea until this trip. As much as I’d like to say my efforts to help build the health center make up for everything I experienced on this trip, I know no amount of shoveling truly equates to what I’ve learned.

During the course of the trip I got the opportunity to connect to with locals on many occasions, making my experience different from any trip I’ve been on before. Interacting with the people in the village was something I realized I never would normally be able to do. When going on vacation somewhere I hardly ever learn about the rich culture of the native residents. Whether it was working at the site together, making tortillas, planting seeds, or snorkeling, these little interactions made my trip so much more special. It became clear to me very early on that the people in the community are very generous, caring people. Despite being a little shy at first, by the end of the trip our group came to know our hosts, Saul and Cindy, very well. The last day of our trip we went snorkeling with them and got the opportunity to learn more about their customs and backgrounds. It was refreshing to hear stories first hand from a person who has lived a completely different life from mine.

One of the aspects of the trip that I found especially unique was the activities and lessons we did with our ASB leaders and our 7 Elements partner. Even though we spent the whole week doing pretty much everything together, I don’t think our group would have gotten to know each other as well if not for the activities and reflections we did together. I was amazed by how different each person’s background and personalities were. Everyone was a little closed off at first but by the end of the week it felt as if we’d known each other for quite a long time. Not only did I learn a lot about my peers but I also learned a lot about Belizean society and how it compares to ours. The lessons we did with our 7 Elements partner opened my eyes to the similarities and differences between America and Belize and what steps need to be taken to develop a healthy and sustainable society. We might have been working to make the Indian Creek community better by teaching them how our society works, but I realized there are ways we can learn from them.

I was stunned by the amount of sustainability present in Indian Creek. The Eco lodge we stayed at was made almost (if not) entirely from local resources – from the woven palm roofs to the rock paths. You can tell the people there have respect for their home and value the resources they have. Because of this mentality I believe they have a much more sustainable lifestyle which we can learn from. They use their resources to the best of their ability and recycle what they can – reducing the amount of waste they create.By growing their own crops and making their food from scratch, they reduce the amount of plastic waste that is normally collected in our trash cans. In addition, they don’t need to rely on imports or the economies of other countries because they are completely independent. Although taking care of the planet we live on seems like a daunting task, I’ve learned a bit of unique thinking and efficiently using our resources can make this mission a little easier.

I never expected that I would be spending the first week of my summer break digging a pit for a septic tank in blazing heat and humidity – let alone in Belize. In hindsight, normally standing outside is intense humidity surrounded by dirt doesn’t sound particularly appealing but I would do it all over again given the chance. My week in Belize ended up being so much more than just shoveling and pickaxing – it was an experience I will never forget that has changed me for the better. I learned more about sustainability, Belizean culture – and even myself – than I had wished for. I cannot be more thankful to ASB and SLS for the opportunity to go on this trip and to the amazing people I met who made it all the better.