Get Out the Vote! 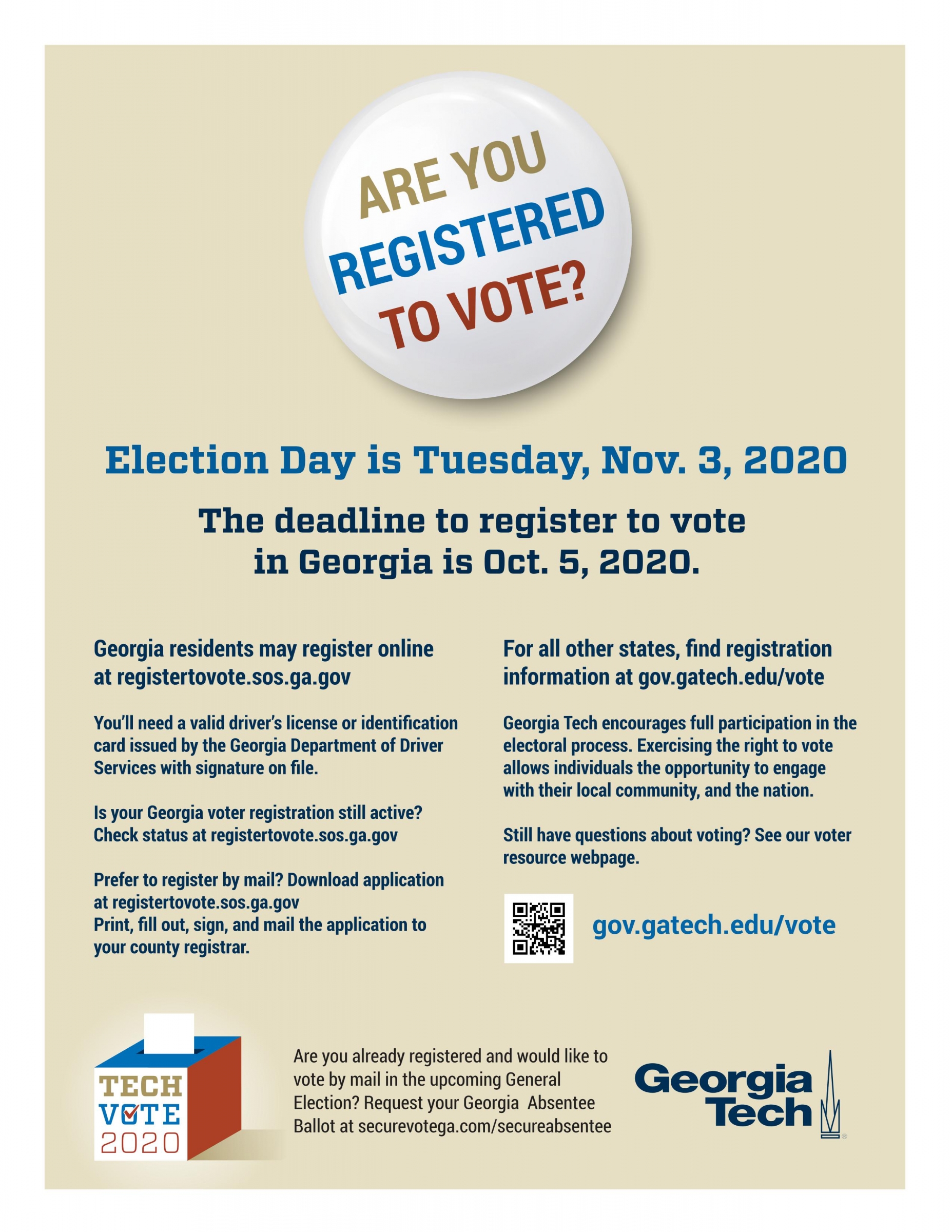 Every election is important, but in the midst of such challenge and change, it is all the more crucial that we honor and exercise the right to vote in November... or October, should you decide to vote early or mail in your ballot.

SLS would like to share GT's handy resource page for Getting Out the Vote, Jackets-style, as well as encourage everyone to attend this Tuesday's "Your Power to Vote" Town Hall event at 11:30am (click here to register)- a forum in which you will hear from a Fulton County Voter Education and Outreach Training Officer and can make sure you’re armed with the information you need to cast your ballot.  If you’re already registered to vote (the deadline to register is October 5th!) and you have made your voting plan (early voting in Georgia starts October 12th!) then please share this post and these resources with a friend you think probably hasn’t registered or made their plans to vote. We at SLS hope that you will spread the word far and wide on campus and off: there is still time to register, and still time to request an absentee ballot.  Below you’ll find some memories and exhortations from the SLS team—staff and students.  And we hope that after you read this, you’ll be moved to share your own story of the first time you voted, your most significant vote, or why you know it’s critical to exercise your franchise . . . . Remember that motivating just one family member or friend is incredibly powerful-- when hundreds of us do it.

Thanks for reading, and let's get out the vote!

Jamie Jones (SLS Senior Administrative Assistant) “The first time I voted was a very scary experience. It was the  late  80’s and Ronald Reagan was already president.   I thought, do I have my ID, am I at the right polling place and am I choosing the right candidates?  All these things were running through my mind at once on top of the older white lady walking around telling everyone WHO to choose. I almost left the school  gymnasium which doubled as a cafeteria during the day.  I am glad I stayed, because it was at that moment, I felt exhilarated and thought that my voting could actually affect  change .  I thought about the stories my Grandmother told me about how women,  especially women of color  had to fight  for the right to vote , and how they stood in line for what seemed like days.  Also, how they were only allowed to vote at churches at first. ( photo below)  This made my decision to vote  an easy choice.  I remember I left the polling place happy that I was able to exercise my right to vote and it only took a few minutes. Here is a pic I “borrowed” from the Civil Rights in America: Racial Voting Rights article. (NAACP photograph showing people waiting to register to vote, 1948. Library of Congress, Prints & Photographs Division, Visual Materials from the NAACP Records [reproduction number: LC-USZ62-122260]​) 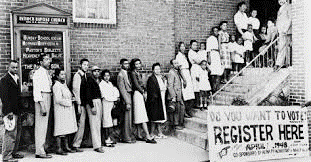 Sophia De Lurgio (SLS Student Assistant, Industrial Design): The first time I got to vote was when I first started at Georgia Tech. It was for a midterm election, and in my neighborhood, there was a lot of excitement for the prospect of flipping the district (and we did!). I remember being unsure about when and where I should vote, but thankfully my mom has always been on top of it. Our voting location is close to our house, and there was no line. The only obstacle was a brief dispute about how my last name was spelled--an issue I actually encounter often. After that was settled, casting the ballot was a seamless process. Ever since then, I've made sure to vote, but it helps that my mom always sends me a reminder over text...

Atticus Lemahieu (SLS Student Assistant, Environmental Engineering): "The first time I voted was for a major election where there was potential to flip the state. I was really excited to finally get to vote and woke up at 5:00 am to get to the polling station with friends before my 8am class. We got there and were one of the first people in line, along with Bud Peterson! It was great to feel the excitement and energy in the air and see all the dedicated poll workers making sure we each had an easy and smooth voting experience."

Josslyn Lally (SLS Student Assistant, Biomedical Engineering): It is important to vote because this is how we can take steps toward making the changes we want to see come to fruition. The communities we want our children to live in depend on the changes that can start NOW. For some of these changes, voting can directly effect whether or not certain changes come to pass. For other larger issues, the power to fight for these changes are in the hands of those that decide to serve our nation as state representatives, senators, commissioners- you name it. They all play a roll in shaping our lives and we have the power to chose who does so. Do your homework and be an informed voter this year, and for all the years to come.

Adair Garrett (SLS Student Assistant, Civil Engineering): The first time I tried to vote, I had registered when I was living at my parents’ house (in Reynoldstown) and I went to a place near to Georgia Tech with a group of friends of mine, but I was rejected because of where I had registered.  I tried to change it on my phone (supposedly you can change it on the website), but it didn’t work quickly enough.  I walked to the Reynoldstown voting center later that day and they told me that I couldn’t vote because I had registered at Georgia Tech.  I was supposed to be at the Center for Civic and Human Rights, the place where I’d been early that day.  The voting for the day closed before I got back.

The next time I tried to vote, I went to an early voting location at a public library.  I had run there (I don’t own a car), and as I was waiting, the weather turned cold and it started raining.  I waited for three hours, shivering in my now cold-clothes, and the polling place technically closed as I was waiting.  At 9pm, when it was completely dark outside and my phone was at 2%, I texted a friend with a car if he could pick me up.  He said he would come by in 30 minutes, and I stood hoping that I would possibly be able to get to the front of the line by the time he arrived.  My phone died, and I waited further.  I was about 40 people back when my friend drove up.  When I left the line to get in his car, people boo’d me for giving up.  The next morning, I woke up at 5am to go to the Center for Civic and Human Rights to vote.

The last time I voted, I waited for about 2 hours to early vote in the primary.  I’m glad I did; almost immediately, everything shut down, and I’m not sure if I would’ve participated in the primary if I’d had to mail in a ballot.

Rebecca Watts Hull (SLS Service Learning and Partnerships Specialist): It wasn’t my first time voting but the earliest significant memory I have of voting is from 1990, when I voted absentee in the midterm election because I was in Tanzania, serving as a Peace Corps Volunteer. According to the Federal Voting Assistance Program, only 4.7% of eligible overseas voters participated in the 2018 election. I remember wondering about the overall impact of Peace Corps Volunteers, military personnel, and other American citizens living abroad on election outcomes. I hope that overseas voter participation is higher for 2020 than it was for 2018.

Kris Chatfield (SLS Program and Operations Manager): Although my parents had specific political views when I was growing up – they always raised us to think independently and really research WHY we were voting the way we chose.  So my orientation has always been on specific candidates rather than any party affiliation . The first time I voted I was about to turn 19 and it was a presidential election year.  I was away at college, so there was a lot of energy and excitement around the idea of voting.

Ruthie Yow (SLS Service Learning and Partnerships Specialist): One of my most significant experiences at the polls was not actually voting—it was serving as a poll watcher in 2018.  When I arrived at 7am, there were already dozens of people in line- some with small children, many of them having woken up early to vote before their work day, all of them determined to cast their ballots—contributing to that election’s historic midterm turnout.  As the morning turned to afternoon and to evening, the weather worsened, but the lines continued to grow.  Some voters would finally reach the poll workers and be informed that they were at the wrong polling station. I was distressed for them- especially when it seemed clear that they had not been sufficiently informed of a precinct change. But I was also moved to see that many of those people- having just waited for hours and looking exhausted at the end of the day- go determinedly to their correct polling location, despite the time, the drive, and the energy it required.  I thought of them when I voted in the 2020 primaries—the pandemic and two hour wait furnishing excuses to go home.  But I didn’t, and neither did thousands of others who waited much longer—affirming not only the importance of voting, but also the importance of insisting that voting be made safe, easy, and equally accessible to all communities in our city, state, and country.

Mira Kaufman (SLS Student Assistant, Public Policy): The first time I voted was in the 2016 Presidential Election.  I had just turned 18 in September. I am a Public Policy major, so you can guess that I was very excited to finally be able to vote and participate in the democratic process. I went to my local polling place, which was the elementary school by my house, and I voted alongside my mom. The process was quick and easy, and the poll workers rang a bell when I voted because it was my first time (embarrassing). I was able to go arrive on time to school afterwards and go about my day. Now I realize that I was lucky to be able to vote with such ease. My subsequent experiences have been much slower - but equally worthwhile.