A Reflection on the Future of Atlanta: Smart City Expo

This is a reflection not only on the Smart City Expo, but also my comments on the companies’ presence there.  Leaving the Expo on the final day, I was left with my mind racing with thoughts on whether these companies are truly working to make a more “sustainable” future or if they are trying to improve their brand by including popular buzzwords in their technology.

This September, I was given the opportunity to attend the first ever Smart City Expo in Atlanta.  There were more than 2500 attendees and 200 speakers over the course of the three day event, and I attended the event with my colleague Amy Pollmann.  For some basic information on the expo - there were many talks available each day, normally lasting around 30-45 minutes each.  The kind of talks included “Building Compassionate Cities” with Ambassador Andrew J. Young, Dr. Bernice A. King, Atlanta Mayor Keisha Lance Bottoms, and Smart City Expo Atlanta CEO Aarti Tandon as well as “Power of Public-Private Partnerships” where Bill Rogers, Chairman & CEO of SunTrust Banks, Inc. and Derek Schiller, President & CEO of the Atlanta Braves, conversed with Rose Scott of WABE on the power of public-private partnerships and the importance of equity and inclusion.  Both of these talks left my colleague and I with a lot to think about as well as plenty of hope - it seemed as if almost every professional in both the public and private sector was interested in doing the most sustainable thing.   My favorite talk by far, however, was in a “TEDtalk” style and was given by a young professional working at Google, Amrit Dhir, Head of Startup Connections.  In his talk he led an interactive discussion where he explored how the audience members should recognize when a project needs to be terminated for the good of the company and for the employees committed to the work.  He was energetic and engaging, but also very humble and was careful to not overstate Google’s attempts in helping communities.

At the end of every conference day, we were able to attend a networking hour where we were encouraged to meet anyone in attendance of the conference.  Amy and I took the opportunity and talked to Ambassador Andrew J. Young.  In his advanced age, he made for a very interesting and patient conversationalist, and Amy and I managed to shake his hand before letting him get on with his business.  This moment was possibly the highlight of my time at the Smart City Expo.

I want to reiterate that this expo was interesting and exciting, but I as a student, I also had some concerns.  As students of civil engineering and computer science, we were interested to see how large companies like Southern Company, Georgia Power, Deloitte, and Siemens painted the future of smart cities.  Being the Georgia Tech students we are, we were ready to discuss the technologies with them and then immediately try to sell ourselves as the perfect interns for any positions available.  Since it was an expo and not a career fair, we did not find many people trying to read our resumes.  Instead, we found many unproductive, if not frustrating, conversations.  Although many of these companies had great technologies and were so excited to talk about how they build net neutral (zero carbon emissions) communities, they were not interested in discussing their ability to cause real change in socio-economic relationships in Atlanta by encouraging programs like mixed-income housing or offering sliding scale rent payments in these communities.  I found a lot of the larger companies didn’t even make the actual technologies that they were so heavily promoting at the expo.  When asked questions about the broader impact of the technologies, many of the representatives would immediately redirect the conversation to another feature of the product or suggest we talk to a colleague of theirs, who normally also had no answer for the questions we asked. As wonderful as so much of the expo was, it was also frustrating to speak with companies who did not understand why I would ask about the social and economic components of sustainability.  They seemed to not understand why I was asking these questions, and I did not understand how they were not.

The longest conversation I had at the expo was with a civil engineer.  The company is a huge company that works with a lot of transportation engineering and planning, which is exactly what I am interested in pursuing after I graduate from Georgia Tech.  I began asking my questions to an electrical engineer of the company, and he redirected me to a more senior engineer.  I went to ask my questions - which boil down to “I understand what and I understand how, and I admit it is very impressive technology - but why?  Who does this serve?  And what about the people left behind?”  The bigger the company, the quicker the interruption of the buzz phrases - the best engineers in the field!  Green and smart technology for constant data!  Network of communication between all devices involved!  There was an answer to my question - why - but I just refused to accept that these engineers were working on this technology for the sake of better technology.

Leaving the conference on the third day, we also ran into Ryan Gravel, the man who envisioned and designed the Beltline, a popular walking trail on the Eastside of Atlanta.  (Possible other highlight of the expo?  The thing is, it is hard to say it was a highlight because he seemed like he did not want to talk to Georgia Tech students at that very moment.)  I was pretty sure it was him because I had seen him speak at Georgia Tech two years before, but I was too nervous to ask.  What I wasn’t too nervous to do, however, is ask him to take a picture of my friend and I: 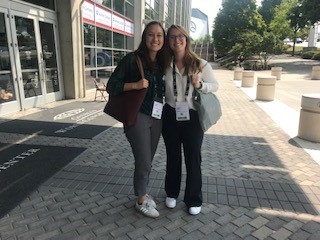 Overall, this expo was a wonderful opportunity to ponder what the future of smart cities will be.  I had engaging one-on-one conversations with politicians, engineers, and planners, all interested in making a more equitable and sustainable community in Atlanta.  I shook the hand of one of the most influential figures in the development of Atlanta into the city it is today.  And I love this city, so I will keep on asking my questions until it is the city I know it can be.